Shipbreaking cartel in Bangladesh comes to an end

After exactly two months in operation, the shipbreaking cartel in Bangladesh  has collapsed as it failed to secure enough tonnage, GMS, the world’s largest cash buyer of ships for recycling, said.

During the sixty-day period ended 21 November, a few powerful local buyers of tonnage for demolition had tried to control prices in their favor – at a time when both India and Pakistan were kicking on, leaving Bangladesh trailing in their wake and doing very few deals.

As explained, end buyers are now free to offer their own prices rather than relying on the below-market prices determined by the cartel.

“Many end buyers had been pressuring for this to happen for some time … and now there is a free market for cash buyers to offer any available tonnage once again,” GMS said.

Demand in Bangladesh has been growing steadily and so it is no surprise that at the latest association meeting, they have decided to end it all and go back to the normal free market ways as certain end buyers had already started to privately offer on tonnage being proposed from cash buyers that were potential Chittagong candidates.

“With steel prices having improved considerably over the course of the last two weeks (by nearly USD 20/LDT), we expect to see the Bangladeshi market potentially emerge as the leading force again in the Indian sub-continent once again,” GMS added.

With the Bangladeshi cartel having collapsed and with Pakistan also improving, Indian buyers will have to make effort to secure their share of tonnage in the coming period, GMS believes. The Pakistani market will also need to maintain its position as the number one placed market.

“As the dearth of units continues, both India and Pakistan have also seen demand and fundamentals improve of late and it now seems that it may only be a matter of time before we start seeing USD 400/LDT breached on select units.” 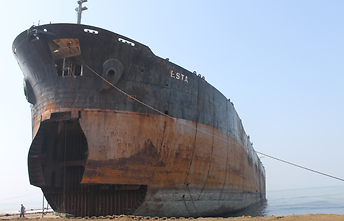